Dwight Clark, NFL football great with the San Francisco 49ers, has passed away at age 61. Clark, most widely known for making "The Catch" from Joe Montana to defeat the Dallas Cowboys in a 1981 NFL playoff game, suffered with amyotrophic lateral sclerosis (ALS).

His wife Kelly made the announcement on social media:

Mrs Clark said her husband passed peacefully surrounded “many of the people he loved most,"

"I am thankful for all of Dwight’s friends, teammates and 49ers fans who have sent their love during his battle with ALS," she said.

Former players, media professionals and fans took to social media expressing their thoughts on the passing of a football legend. 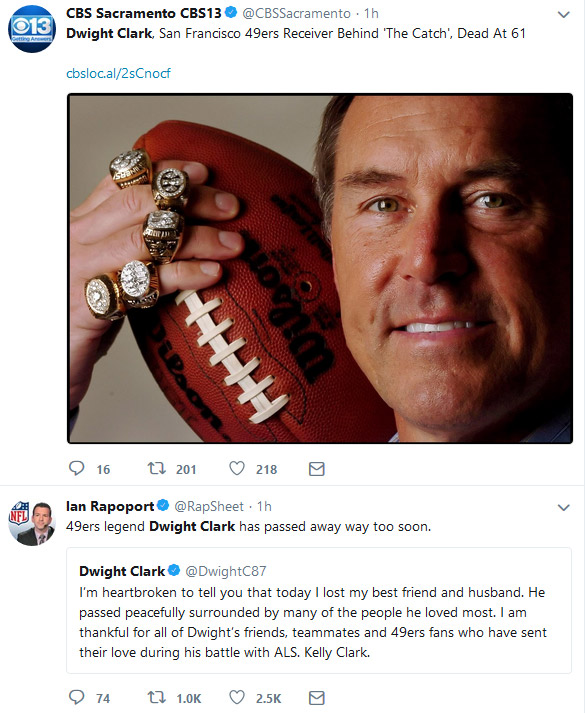 Clark retired following the 1987 season. He spent all his nine-year career with the 49ers, ranking third and fourth in franchise history in receiving yards (6,750) and receptions (506).

In 1999, the Cleveland Browns hired Clark to be general manager and director of football operations. He resigned just before the start of the 2002 season after then head coach Butch Davis demanded control over personnel decisions.

It was March of 2017 that Clark announced he had been diagnosed with ALS.  Known as “Lou Gehrig's Disease”, ALS is a progressive neurodegenerative disease that affects nerve cells in the brain and the spinal cord. It causes disability, long-term care and death. ALS usually strikes people between the ages of 40 and 70, and it is estimated there are more than 20,000 Americans who have the disease at any given time (although this number fluctuates). 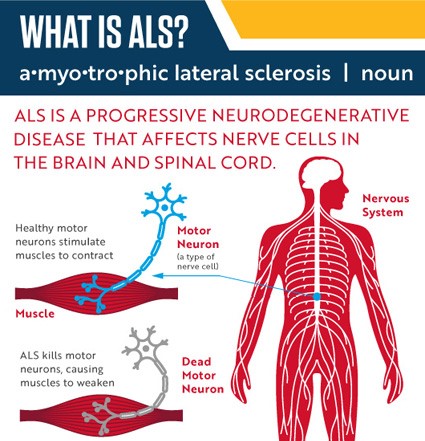 In an open letter, Clark said he had been experiencing symptoms since 2015. By the time Clark went public with his diagnosis, he said he was no longer able to button his shirt.

"While I’m still trying to wrap my head around the challenge I will face with this disease over the coming years," Clark wrote, "the only thing I know is that I’m going to fight like hell and live every day to the fullest."

Former San Francisco 49er’s owner Eddie DeBartolo said Clark was responsible for one of the most iconic plays in football history and a string of successful years for the team.

“He will always be an extension of my family. I love him and will miss him terribly,” he said in a statement.

According to the ALS Association, the initial symptoms vary from person to person.  One person might have trouble grasping a pen or lifting a coffee cup, while another person may experience a change in vocal pitch when speaking. Generally, there is a graduate increase in symptoms

The association says the mean survival time with those impacted by ALS is three to five years, many people live five, 10 or more years. Symptoms can start in the muscles that control speech and swallowing or in the hands, arms, legs or feet. Not all people with ALS experience the same symptoms or the same sequences or patterns of progression. However, the association says progressive muscle weakness and paralysis are universally experienced.

Gradual onset, generally painless, progressive muscle weakness is the most common initial symptom in ALS. Other early symptoms vary but can include tripping, dropping things, abnormal fatigue of the arms and/or legs, slurred speech, muscle cramps and twitches, and/or uncontrollable periods of laughing or crying.

When the breathing muscles become affected, ultimately, people with the disease will need permanent ventilatory support to assist with breathing.

Health insurance, including Medicareand MedicareSupplements, will pay for only minimal ongoing costs related to ALS. Like most long-term care services, care is limited to skilled care for a limited amount of time. ALS generally requires a substantial amount of 24/7 care. The cost of the care will drain the savings of most people fairly quickly.

The financial costs and burdens of aging have a dramatic impact on your family, your savings, and your lifestyle. While most long-term care situations are not as dramatic as you would find with a person suffering from ALS, long-term care services can be a significant burden on family and assets.

Planning, however, must start when you have good health. Experts suggest starting your research before retirement when you may even qualify for good health discounts.

The guaranteed tax-free benefits of Long-Term Care Insurance offer you access to your choice of quality care, including care in your home. A policy will give you control and independence, alowing your family the time to be family.

Premiums are affordable and now rate stable. Most states have rate stability regulations in place, making it much harder for premium increases that impacted older “legacy” products that were sold decades ago. You can find your state by clicking here.

Forty-five states offer Long-Term Care Partnership policies that provide additional dollar-for-dollar asset protection. Start by finding out the current and future cost of long-term care services and supports by using the LTC NEWS cost of care calculator. Find the cost where you live by clicking here.