This story is updated with information on Sully H.W. Bush, the yellow Labrador service dog.

The 41st President of the United States, George H.W. Bush, has passed away at age 94. His office released the following statement:

His son George W. Bush, who served as the 43rd president, released a statement of his own from the family.

"Jeb, Neil, Marvin, Doro, and I are saddened to announce that after 94 remarkable years, our dear Dad has died," George W. Bush said. "George H. W. Bush was a man of the highest character and the best dad a son or daughter could ask for. The entire Bush family is deeply grateful for 41’s life and love, for the compassion of those who have cared and prayed for Dad, and for the condolences of our friends and fellow citizens." 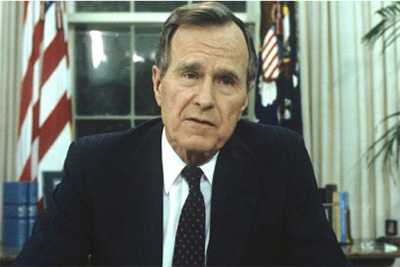 The late President Bush suffered from vascular parkinsonism, a form of Parkinson's disease that had forced him to use a motorized scooter or wheelchair.

He had talked about his medical condition which had restricted his ability to walk in an interview in 2012.

"They call it vascular Parkinsonism," Bush told Parade magazine. "It just affects the legs. It's not painful. You tell your legs to move, and they don't move. It's strange, but if you have to have some bad-sounding disease, this is a good one to get."

His family said publicly that the former president was no longer able to walk without the assistance of another person. As someone who had enjoyed a very active lifestyle which had included golf, fishing, jogging and power walks on the beach near his summer home in Maine, it was frustrating for this man who was known be have been very energetic.

Despite needing help with normal living activities, Bush tried to not let it slow him down. Known as a Navy pilot in World War II, he celebrated his 75th, 80th, 85th and 90th birthdays by making a parachute jump from an airplane. 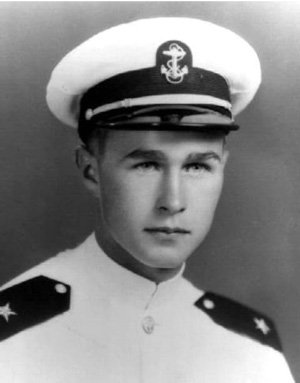 He flew 58 combat missions in the Pacific as a torpedo bomber pilot. He was shot down by the Japanese in 1944. For his effort at bringing the plane down and saving most of its crew, Bush was awarded the Distinguished Flying Cross.

The foundation says since the cause of vascular parkinsonism is fundamentally different from true Parkinson’s Disease people do not always respond well to the Parkinson’s disease medications.

In both cases, many people who suffer from either disease often require help with normal living activities and need long-term care services and supports. In some cases, people suffer from some dementia. 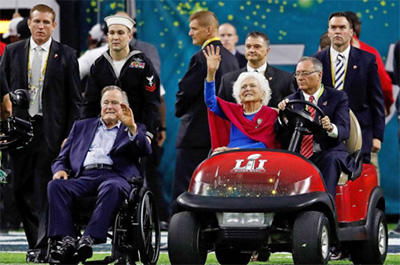 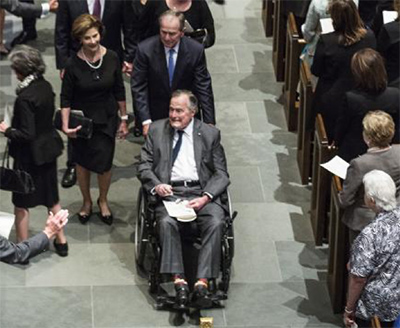 In an interview, the former president said he believed in an afterlife was coming to terms with his own mortality.

"I've wondered about [heaven]. Who you see when you get there. Who do you look up? How do you find them? There's a lot of people there. Maybe you look around, find some didn't make it, too. ... I don't know how that works. I don't think anybody knows," he said. "I don't fear it, though.

"When I was a little guy, I feared death. I'd worry about it. I'd be scared. Not anymore." 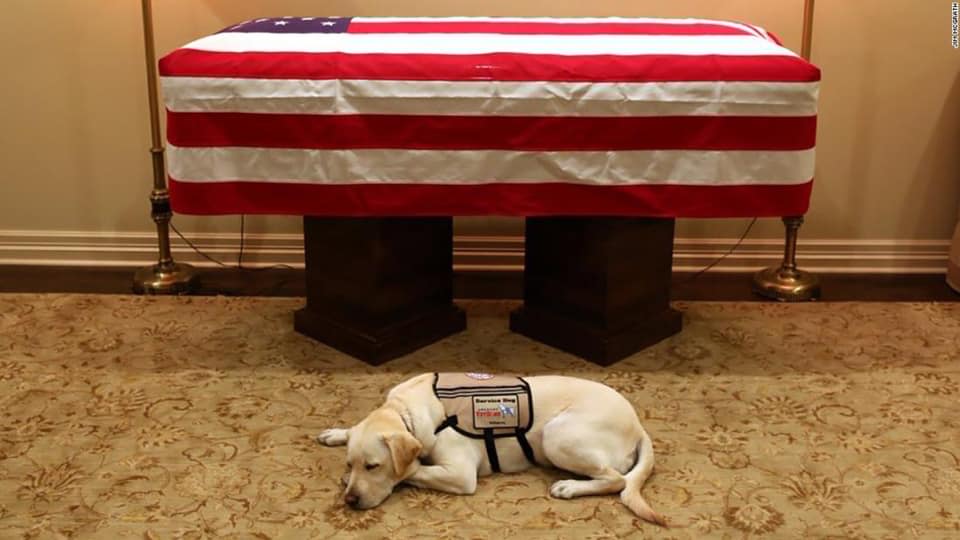 The late President did have help late in his life. His helper was Sully H.W. Bush, a yellow Labrador service dog. The former president was matched up Sully after Barbara Bush passed away. The service dog had a long list of tasks. He was trained to pick up an item as small as a credit card or as large as a cane, get help by pushing an emergency button and wake his handler from a nightmare.

The dog was named after the pilot who safely landed a plane full of passengers on the Hudson River in 2009, Chesley "Sully" Sullenberger III. “Sully” was trained through a prison puppy program until he was a little older than a year, according to VetDogs. Inmate handlers taught him standard commands and housebreaking before he returned to a specialized campus in New York to learn more skills that would help his handler. In this case, it was the former President of the United States.

Sully is traveled with President Bush one last time, accompanying his casket to Washington, DC.

No matter who you are, the impact of longevity will affect your family and your savings. Even a former president, who was known to have been very active in both his career and personal life, can be touched by the many problems with aging and long-term care.

However, most of us are not former presidents. Caregiving is very stressful on family members. Paid care will drain even large estates. The U.S. Department of Health and Human Services says if you reach the age of 65 you will have a 70% chance of needing some type of long-term care service.

People require long-term care due to illness, accidents of the impact of getting older. Health insurance will not pay for most long-term care services. Neither will Medicareor MedicareSupplements once you are 65. This means you need an advance plan to safeguard your retirement accounts and reduce the burdens placed on loved ones.

The solution is affordable Long-Term Care Insurance. Start your research by find your state on the LTC NEWS MAP. This will show you the current average cost of long-term care services and supports, available tax incentives and the availability of partnership plans which provide additional dollar-for-dollar asset protection. Click here for the map.

Experts suggest adding a policy prior to your retirement. Premiums are based, in part, by your age and health. When you are in your 40s and 50s you are more likely to qualify for preferred health discounts. They also suggest working with a Long-Term Care Insurance specialist who represents all the major insurance companies. This way you can design an appropriate plan which is both affordable and appropriate based on your specific situation.

You can find a specialist by clicking here.

Fill in the gaps with a complete guide on long-term care and insurance.