More and more American families must address the consequences of aging and the long-term care needs that come from an extended illness, accident, or other issues of aging – including cognitive decline. This puts a financial, emotional, and physical burdens on family members who usually must either provide care or manage paid care services.

Research shows nearly two-thirds of Americans with Alzheimer's disease are women. Now researchers questions to long-held belief it is merely due to the fact that women have more longevity than men.

Several questions are being asked. What other factors make a woman have a more significant risk for cognitive decline? Are genetics part of the equation? Are biological differences in how women age compared to men? Could certain lifestyle factors cause a high risk of women suffering from cognitive decline?

The fact is this risk is a real concern. 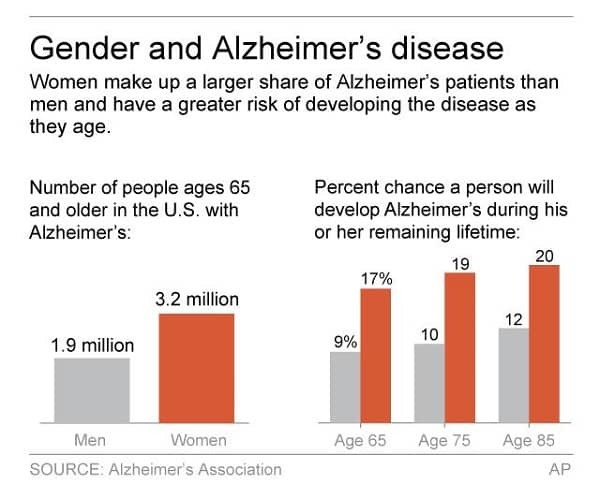 However, death is only a part, although the final part of the impact of Alzheimer's. The need for supervision and other help with routine activities of daily living is a tremendous burden on family and finances. Health insurance, including Medicare and Medicare supplements, will not pay for this care.

But there is more. Women get hit twice because of this disease. They often become caregivers for a husband or other family member who requires long-term care. Interestingly enough, women are more likely to care for others with Alzheimer's as well. So not only are women more likely to suffer from cognitive problems, they typically become the first caregivers.

The Alzheimer's Association says more than 3 in 5 unpaid Alzheimer's caregivers are women — and there are 2.5 more women than men who provide 24-hour care for someone with Alzheimer's. In 2016, more than 15 million caregivers of people with Alzheimer's or other dementias provided an estimated 18.2 billion hours of unpaid care, a contribution to the nation valued at $230.1 billion.

Because of the stress, burden, and time of their caregiving duties, women are likely to experience adverse consequences at work. Approximately 19 percent of women Alzheimer's caregivers had to quit their job either to become a caregiver or because their caregiving duties became too burdensome. This has a tremendous impact on the caregiver's family financially. Plus, there is an emotional toll on the caregiver's family relationships.

Discovering the answers as to why women suffer from more cognitive decline than men could affect available treatments or even preventive care. One hint is the research is showing that an Alzheimer's related gene has a more significant impact on women than men. However, genetic factors are considered only part of the problem.

"There are enough biological questions pointing to increased risk in women that we need to delve into that and find out why."

The Alzheimer's Association had brought 15 leading scientists together to ask what's known about women's risk. Research is being conducted to find answers.

There is a lot that is not understood and not known. It's time we did something about it," she added.

"It is true that age is the greatest risk factor for developing Alzheimer's disease."

The World Health Organization had presented data on gender differences at a meeting of the National Institutes of Health.

"on average, women live four or five years longer than men, and we know that Alzheimer's is a disease that starts 20 years before the diagnosis."

That's how early cellular damage can quietly begin. Brinton is researching if menopause can be a tipping point that leaves certain women vulnerable.

But gene research offers the most startling evidence of a sex difference.
Stanford University researchers analyzed records of more than 8,000 people for a form of a gene named ApoE-4, long known to increase Alzheimer's risk.

Women who carry a copy of that gene variant were about twice as likely to develop Alzheimer's eventually as women without the gene, while men's risk was only slightly increased, according to Stanford's Dr. Michael Greicius.

It's not clear why. It may be in how the gene interacts with estrogen, Brinton said.

Amy Shives, 57, of Spokane, Washington, in a Yahoo News story recalled when her mother began showing symptoms of Alzheimer's. She says it wasn't until after her own diagnosis a few years ago that she looked up the gender statistics.

"That was alarming," said Shives, who is in the early stages of Alzheimer's, which struck at a younger-than-usual age and forced her retirement as a college counselor. "The impact on our lives and that of our families is extraordinary."

She points to another disproportionate burden that the majority of caregivers for Alzheimer's patients are women.

"My daughters are in their 20s and I'm already ill."

"It's very stressful for them to think about when their mother's going to need their help."

What drives the difference in Alzheimer's cases isn't clear, said Dr. Susan Resnick of the National Institutes of Health, pointing to conflicting research.

"We really have had a tough time understanding whether or not women really are more affected by the disease, or it's just that they live longer."

Dr. Susan Resnick of the National Institutes of Health

Data from the long-running Framingham, Massachusetts, health study suggests that because more men die from heart disease in middle age, those who survive past 65 may have healthier hearts that, in turn, may provide some brain protection.

Many of the same factors — obesity, high cholesterol, diabetes — that damage arteries also are Alzheimer's risks.

One question being asked is the role of hormones? That's has been hard for researchers to answer so far. Many years ago, a major study found that estrogen therapy after age 65 could increase the risk of dementia. However, later research showed hormone replacement around the onset of menopause did not pose an issue.

Brinton studies how menopause changes the brain. Estrogen helps regulate the brain's metabolism, how it produces the energy for proper cognitive function, and it must switch to a less efficient backup method as estrogen plummets, she explained.

"It's like the brain is a little bit diabetic."

The question is whether this higher risk may relate to menopausal symptoms in women who later experience cognitive problems.

Carrillo notes that 40 years ago, heart disease was studied mainly in men, with little understanding of how women's heart risks can differ.

"How do we make sure we're not making that mistake when it comes to Alzheimer's?"

All this research doesn't change the world we live in today and what we do with this knowledge. Unfortunately, despite many news stories about the risks of cognitive decline and long-term care, many people are unprepared for the physical, emotional, and financial burdens that American families face when a loved one requires long-term care services.

Preparing Your Family and Finances

The natural human reaction for many people is it won't happen to them, or they will deal with it when the time comes. The best way to address the financial costs and burdens of aging is with advance planning.

Affordable Long-Term Care Insurance offers guaranteed tax-free benefits that can be used to pay for your choice of quality care - including care in your own home.

You can protect your savings and income and, just as important, ease the stress and burden on your family. Shared spousal benefits help couples affordably plan.

In 45 states, Partnership Long-Term Care Insurance provides dollar-for-dollar asset protection. See if your state is one of those states by clicking here.

The cost of long-term care is expensive. Find the current and future cost where you live by using the LTC NEWS cost of care calculator by clicking here.

The best time to plan is in your 40s or 50s when premiums are low, and your health is still good. Don't wait until you have few or no options available.

Get professional assistance in finding the best plan that matches your age, health, and family history. A qualified and experienced Long-Term Care Insurance specialist has the knowledge and expertise in this area. Also, specialists usually represent the top insurance companies, not just one or two. Since premiums and other policy features vary dramatically, a specialist can save you money.

portions of this article were originally published on YAHOO NEWS -

The financial costs and burdens of aging requires a plan. Be it your health, future retirement strategy, family issues, and more, people desire information on how to better prepare for the next phase of life.

Get something said so America hears. You can write a story for publication on LTC NEWS. It should fit our target audience of adults 40-70.

Topics can include stories on health, long-term care, aging, retirement planning, caregiving, and more. You can even promote yourself, your business, and your website or blog. It must have editorial content exclusive for LTC NEWS and can't be just an advertisement. It can include links to other sites, and you can share the article link once published on your website or social media. 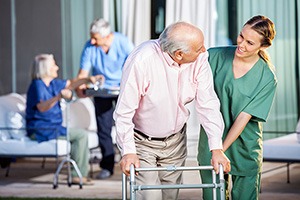