It seems the campaign cycle gets earlier each time, but the 2020 campaign for president is now in full swing. 20+ candidates are seeking the Democrat nomination to face President Trump. The issue of long-term care has captured the attention of candidates and voters alike.

Currently, health insurance, including Medicare, pays only a limited amount of skilled long-term care services and nothing toward “custodial” care which is what most people end up needing at some point. People require long-term care due to illness, accident, or the impact of aging. The risk of needing care increases dramatically with age. The U.S. Department of Health and Human Services says if you reach age 65 you have a seven in ten chance of needing some long-term care service, including supervision due to cognitive decline.

Medicaid will pay for long-term care services, including custodial care, but only if you have little or no assets and income. The Long-Term Care Partnership Program, which currently 45 states participate in, provides dollar-for-dollar asset protection if you own a qualified Long-Term Care Insurance policy. This is a safety-net program that allows the person to qualify for Medicaid without exhausting all their assets. They can shelter part of their estate based on the total amount of benefits paid by the policy and still qualify for the Medicaid long-term care benefit.

Much of the attention is being focused on the so-called “Medicare-for-All” that Sen. Bernie Sanders has spearheaded in his campaign. This proposal is also being embraced by Sen. Elizabeth Warren and Andrew Yang. This proposal would eliminate private insurance and would include benefits for long-term care. While many argue the cost of this program would make it impossible to implement even with large tax increases, they claim it is the only way to provide adequate health care for all Americans. 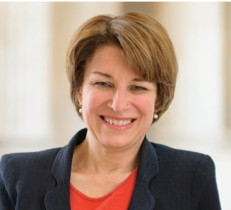 However, Sen Amy Klobuchar is supporting a program for those who are now in need of care or future care, as well as for those who wish to plan for their future care. She supports a tax credit for caregivers and private Long-Term Care Insurance. The tax credit can assist in paying for long-term care services and supports either at home or in a facility. It could also be used to pay for assistive technologies, respite care and required home modifications. She would pay for this credit with a new tax on certain types of investments. Klobuchar’s Long-Term Care Insurance tax credit would be equal to 20% of the total premium which can make premiums even more affordable.

Other Democrat candidates are talking about a public or private option for health insurance where an individual can decide which program they want. This is being promoted by Mayor Pete Buttigieg, Sen. Cory Booker, former HUD Secretary Julián Castro, Sen. Cory Booker, and Sen. Kamala Harris. It is unknown whether long-term care coverage beyond what Medicaid already covers for the poor would be included in any new government program.

Meanwhile, President Trump had supported a tax credit for all health insurance as part of his tax plan, including Long-Term Care Insurance. However, the tax plan which was passed by Congress did not include that option.

The President also supports an expansion of Health Savings Accounts. These pre-tax – tax-deferred accounts can be used for all types of health-related expenses including Long-Term Care Insurance. An expansion would allow more people to have these accounts and add more money than what is currently allowed.

In March, speaking at the 19th Annual Intercompany Long-Term Care Insurance (ILTCI) Conference, several political insiders specializing in healthcare, from both sides of the aisle, agreed that a complete healthcare reform like Medicare-for-All would never be passed by Congress.

With long-term care, many people are in denial about their future need for long-term care. Yet, many American families are personally dealing with a parent or other family member who is receiving extended care services. Longevity will increase this risk in the decades to come.

Long-Term Care Insurance is Affordable for Many Americans

Some people assume Long-Term Care Insurance is expensive. However, as more people purchase plans before retirement, in their 40s and 50s, they are finding these policies are very affordable. Additional tax benefits will help make the costs even more affordable for more American families.

Premiums today are also rate-stable as many states have rate stability rules in place (click here to find your state). In addition, single premium products exist with death benefits in the event you never require care. While campaigns will come and go, the need to plan for the financial costs and burdens of aging remains a major part of retirement planning that needs to be addressed.

There are several types of policies to choose from. No matter which type of plan you purchase, Long-Term Care Insurance is easy, affordable and rate stable income and asset protection. Many people can take advantage of tax incentives that are available today. These policies are custom designed but be cautious since premiums can vary over 100% between companies for the exact same coverage. This is why you should seek the help of a qualified Long-Term Care Insurance specialist. Find a specialist by clicking here.

Items to Discuss with a Long-Term Care Specialist

Take a moment and find the current and future costs of long-term care in the area you live in. This will help you decide the amount of coverage is appropriate for you in your situation. For example, if you have a defined pension when you retire the amount of benefits you would need for long-term care would be less than an individual who will fund their future retirement with earnings off investments. In that case, protecting the principal is essential since that will produce your future income.

Find your state and use the LTC News cost of care calculator by clicking here.

It is always best to start planning before you retire. Once you have your plan in place you will enjoy peace-of-mind and your family will thank you decades from now.

Dogs are a Best Friend for Those with Dementia

Many people suffer from allergies. As you age, allergies can complicate existing health issues. Plus, knowing if you have a cold, the flu or an allergy is important. With our longevity, advance planning is key.

If your elder Mom or Dad is transitioning to long-term care adding a pet to the caregiving team can be a huge benefit for both your parent and the animal.