Lifetime's "The Balancing Act" does a segment on Long Term Care Insurance and how plans can benefit families.

Kristy Villa: It's a topic that's been discussed on the balancing act countless times: longterm care, needing care for an extended period of time, whether you're at home or a facility. Today we're speaking with a guest that our very own producer found for us to share her personal story so that others can avoid the emotional, physical, and financial devastation that is involved when trying to care for a loved one. We'd like to welcome Sherry. Good morning, Sherry.

Kristy Villa: Thank you so much for being here.

Sherry Shul: Thank you for having me.

Kristy Villa: You came down from Northern Indiana to tell us your story and it's a difficult one to tell and I really appreciate your courage to tell us. It's regarding your mom and dad. Can you share it with us?

Sherry Shul: Sure. My dad was in ailing health and my mom was the caregiver. He had a hip replacements and he had hard time walking. With all the stress of taking care of him, she died unexpectedly.

Sherry Shul: It got so worse that my dad had back surgery and we were hoping that would take care of his walking to get back home to take care of himself. But that didn't happen with the rehab. He was staying in a nursing home.

Kristy Villa: He just had a stroke, too, didn't he, Sherry?

Sherry Shul: Yes. That will take more nursing care than what he had before the stroke.

Kristy Villa: I'm sure obviously they did not have the longterm care.

Sherry Shul: No, they did not.

Kristy Villa: You have taken full responsibility for this?

Sherry Shul: Yes. There is no planning for any of this. Financial, he's been using his savings to pay for the nursing home. We had to have an auction to sell everything to continue to pay for this.

Kristy Villa: Have you asked yourself what will we do when the money runs out?

Sherry Shul: Yes. My sister and I have looked at other different options for him because we want the best care for him and to get him back to the way he was. Right now, I guess we'd have to depend on Medicaid, which they don't do the best health care or taking care of nursing home. It's a different option that we might have to take to move him to another facility.

Kristy Villa: How has this affected you and your family, personally?

Sherry Shul: It's very stressful. My spouse and my children, it does take away time with them, and my vacation at work I use to take him to the doctors, doctor visits, and there's always meetings at the nursing home. It does take a lot of your time.

Kristy Villa: Tell me why you're here today. Why are you telling us this story?

Sherry Shul: I'm hoping that there's families out there that don't have to go through this that we have. I'm hoping that somehow, some way that they can find a different route instead of having planned for some healthcare.

Kristy Villa: Because it can happen to anybody. Right?

Kristy Villa: Thank you so much for telling us their story. Now coming up next after the break, we're going to also talk with Mark Goldberg. He is the president of Acsia, an LTC Global company, and he's going to talk to us about ways you can prevent going through what Sherry's going through right now. We're going to discuss how you can protect your family, everybody around you. That's just ahead, so stay tuned.

Welcome back, everyone. Just before the break we heard the personal story of Sherry Shul, a daughter who's struggling to care for her ailing father, and now we're going to help you at home take action to find solutions so you are never in the same situation as Sherry. We want to welcome to the show an expert on longterm care, Mark Goldberg, President of Acsia, an LTC Global company. Good morning, Mark.

Mark Goldberg: Good morning, Kristy. Thank you so much for having me.

Kristy Villa: Thank you so much for being here.

Kristy Villa: Sherry, again, thank you for staying with us on the show this morning.

Kristy Villa: Very powerful. It's a story that can happen to anybody. Anyone.

Mark Goldberg: Yeah. Unfortunately, it's not an uncommon story. Once people find themselves in need of care, all the unexpected things that can happen, you can't forecast. It's so very important to be prepared. Putting a plan in place while the family is still healthy, while everyone can contribute, can save so much strife and emotions later on when people might have differences of opinion. One of the things Sherry mentioned is that they want to be able to stay at home when they get care. If you put a proper plan in place-

Kristy Villa: You can.

Mark Goldberg: ... you'll be able to stay at home a lot longer.

Kristy Villa: Let me be the devil's advocate here because I, like Sherry, I'll be honest with you, my parents are healthy. They're in their late 60s. We've never talked about it.

Kristy Villa: We've never even sat down to think about it because I look at them and I say they're healthy. Nothing's going to happen.

Kristy Villa: Again, Sherry is a perfect example that that is not true. What are the one, two, threes for someone even like me?

Mark Goldberg: The real stress in a circumstance like this is not on the person getting the care, but on the caregiver. In fact, we have research that shows that the likelihood of the person giving the care goes up eight fold for them needing care themselves eventually, simply because of all that stress as a result of having to be the caregiver and deal with all the unexpected things now that they didn't have to deal with prior to the person they love needing care.

Kristy Villa: Tell us a solution for people like Sherry, myself, and others out there.

Mark Goldberg: Three things you need to do if you're addressing this issue. One, don't wait, don't procrastinate.

Mark Goldberg: You got to get out there to, as I said, you have to apply for this, get accepted for it. You need to do that while you're healthy. You don't wait until your home's on fire to go get homeowner's insurance and nobody would give it to you then, anyway.

Second, educate yourself. There's lots of differences, variations of plans that are available to you, lots of options for care and choices. You need to get out there and get as much information as you can.

Then most importantly, work with an expert, someone who really knows longterm care. Don't get this from the same person that sells you your auto insurance. Get this from someone who understands the intricacies of the different plans, can help design a plan to meet your specific needs.

Kristy Villa: Mark, it's like health insurance. Right? Kind of, sort of?

Mark Goldberg: It's about protecting your life savings.

Kristy Villa: Sherry, how could something like this have helped you?

Sherry Shul: Well, we wouldn't have had to have an auction as soon as we had to.

Kristy Villa: You auctioned off all your memories and valuables and personal items?

Kristy Villa: It would have changed your life dramatically, wouldn't it have?

Mark Goldberg: Well, as she pointed out, the criteria for getting help for her dad changed dramatically when her mother died. Because when her mother was alive, they were able to protect the house and some of the savings and the car. But as soon as he was just himself, now they had impoverished themselves in order to qualify for any kind of government care.

Kristy Villa: The bottom line, honestly, both of you, is regardless of how young you are or how healthy you are, it's really something one should think about. Right, Sherry?

Mark Goldberg: Absolutely. Again, I can't thank you enough for helping bring this message to your audience.

Kristy Villa: I'm glad you even opened my eyes because it's something that I think I need to think about as well, even at my age.

Kristy Villa: Thank you so much, Mark-

Kristy Villa: ... for the information. Sherry.

Kristy Villa: Good luck to you and your family. Like Mark said, now is the time, right now, to think about the future for yourself and your loved ones. If you would like more information on finding the right kind of longterm care for your family and get an expert, like Mark said, simply visit the website, especially created for Balancing Act. He just said it. It's called BalancingLTC.com. Again, BalancingLTC.com. 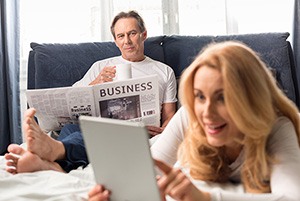 When you reach age 50, you start to understand the consequences of aging. Retirement is ahead, and you start noticing changes in your health, body, and mind. Preparing for the growing cost of long-term health care is vital to retirement planning.